Everyone is looking for the swing secret to lower scores. While improving your mechanics and skills are big keys to unlocking your potential, most golfers are leaving a boatload of shots on the table simply though poor course management.

We know from statistics that over 90% of shots are left short of the pin – this can be a game killer.

The reasons for this are either

This article will look at 3 example hole scenarios with strategic suggestions for how to play them.

A well struck shot is dreamy – it’s compounded when the ball lands close to the pin. In fact, there is probably no better feeling in golf.

But let’s be real – how often do we strike the ball perfectly?

So it’s highly likely you won’t be hitting more than that. Rather than whine about it, do what the pros do – manage your mistakes.

Below a certain handicap range (18 or so), I have found that the majority of players are actually pretty consistent with their distances.

In fact, it takes a pretty poor strike for you to fall outside of that. So we could say that the vast majority of shots will fall between your best strikes and 20 yards short of that.

Now, obviously there will be more outliers (some duffs, shanks and topped shots) at the amateur-level, but we shouldn’t really base the majority of our strategy on those. You should work to improve the outliers, while managing your dispersion of your usual patterns.

SCENARIO 1 – PIN ON THE BACK

In the below picture, the pin is situated on the back of the green. 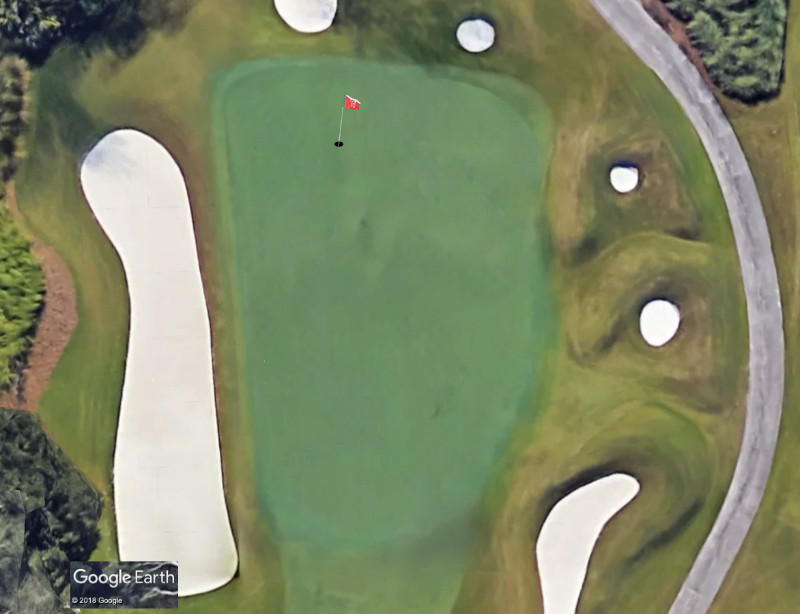 We don’t really want to go long here, as that will often leave us one of the worst up and down chances. However, based on  the stats (over 90% of shot are left short by average golfers), this is unlikely to be an issue.

This is a perfect time to play the following strategy – 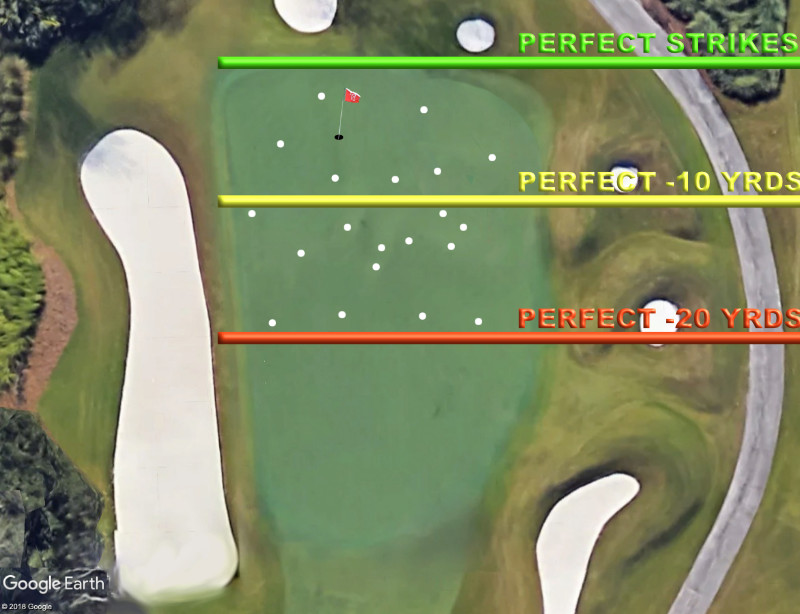 You don’t have to worry about overshooting the green as a perfect strike will only fly to the back of the green (if you calculated correctly) – and it’s not often we hit perfect strikes anyway. These great strikes are more likely to have higher spin rates and hold the green better too.

When you wouldn’t play this strategy?

If the green is particularly narrow at the back and/or guarded heavily, while the middle/front of the green is relatively fat/unguarded.

In the below picture, the flag is on the middle of the green. 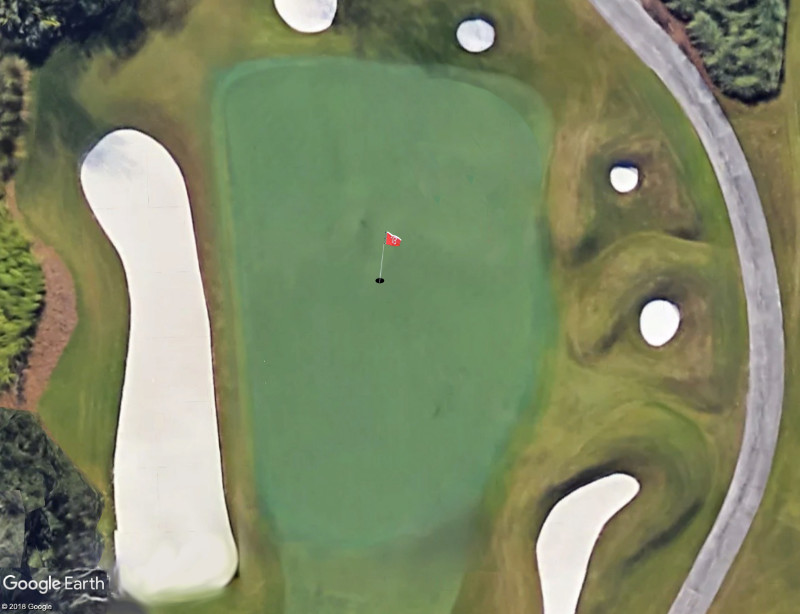 In this example, I will often suggest the following strategy

Through using this strategy, you will get some shots which fly 7-15 yards past the pin (those outlier perfect strikes), but the majority of average strikes will lose 10 yards and end up closer to the flag.

Imagine that – being rewarded for an error! 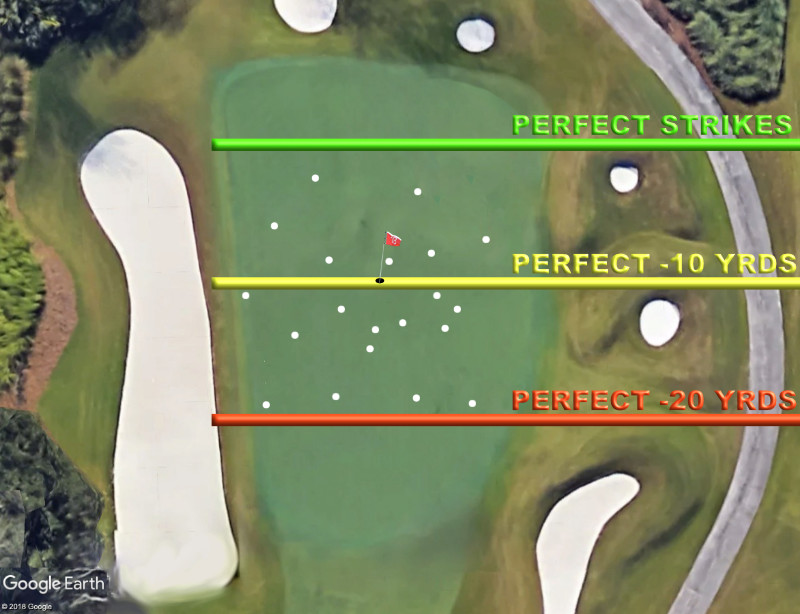 Even if you hit the bottom end of your normal range (15-20 yards short of your perfect strike), you will only end up 5-10 yards from the pin.

When wouldn’t you use this strategy?

Perhaps in the scenario where the green slopes severely from back to front, and a putt from level with or past the pin would be particularly tricky. In this case, “going for the pin” might be a good idea, as any shots short will leave you with an (often easier) uphill putt.

SCENARIO 3 – PIN ON THE FRONT OF THE GREEN

Here’s where we can save the average golfer a lot of shots.

In the below scenario, the pin is tucked on the front of the green. 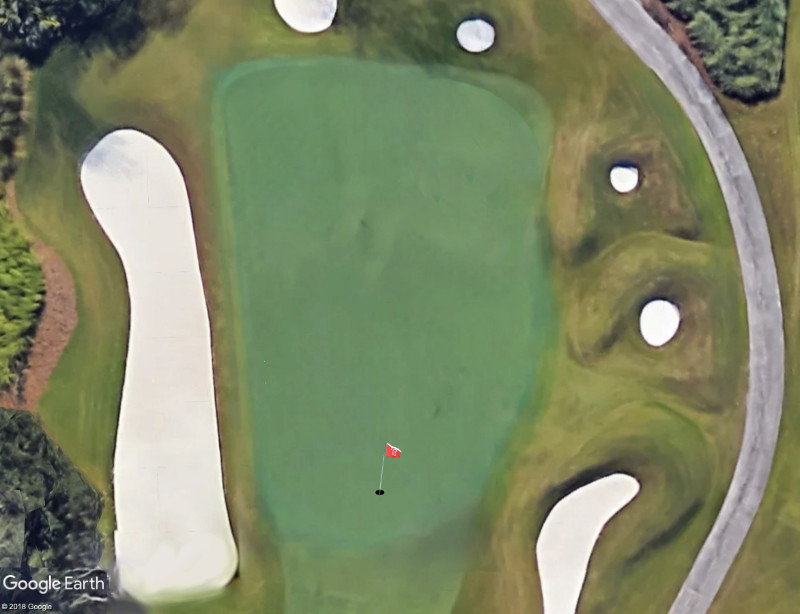 This is one of those really enticing pins – it’s one of the best feelings in the world when we flush a shot  and it lands right next to the pin and sits like a well trained dog.

But, as great as that feeling is, attempting it will cost you more shots in the long run.

A better strategy here would be 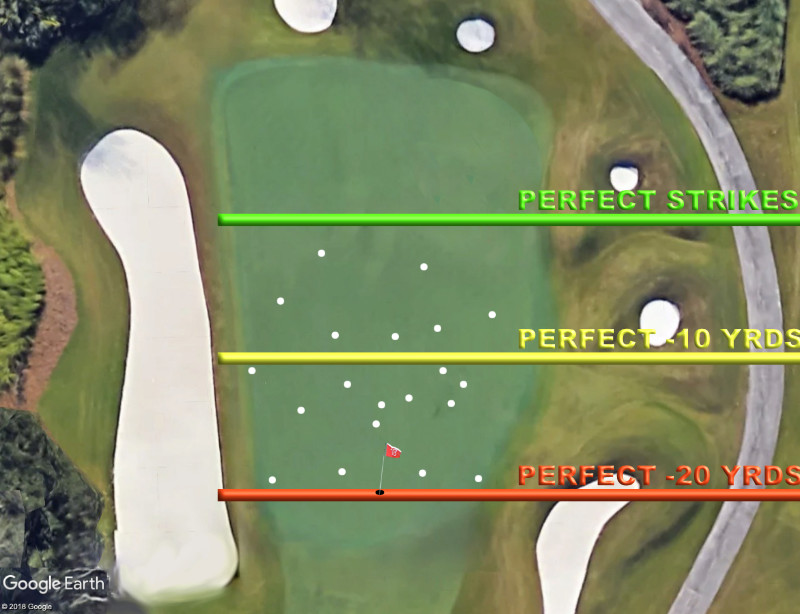 Through using this strategy, the perfect strikes will be on the green. You might have more distance to cover with the putter, but I can tell you that you are much less likely to 3 putt than you are to drop a stroke from landing short.

So, unless your up and down rate on tricky, short chip shots beats your 3 putt percentage from 20 yards, stick with this strategy.

And remember – you are more likely as an amateur to hit the ball to the lower end of your range than the upper end of the range. With that in mind, playing for the pin’s yardage is not a good strategy.

Through using the “Pin +20 yards” strategy, most of your average shots will fall closer to the flag – and your “bottom of range” shots will still hit the front of the green and be close.

That’s what a pro means when they speak about “managing misses” and “making your mistakes work for you”.

When wouldn’t you use this strategy?

The only time I can see this being a poor strategy is if your chance of getting up and down from short of the green outweighs the chance of you three putting from going past the pin.

In order for this to also work, you would ALSO have to have a pattern where you hit more flushed shots than “bottom of range” shots.

In other words – almost never. Unless you’re Phil Mickelson. 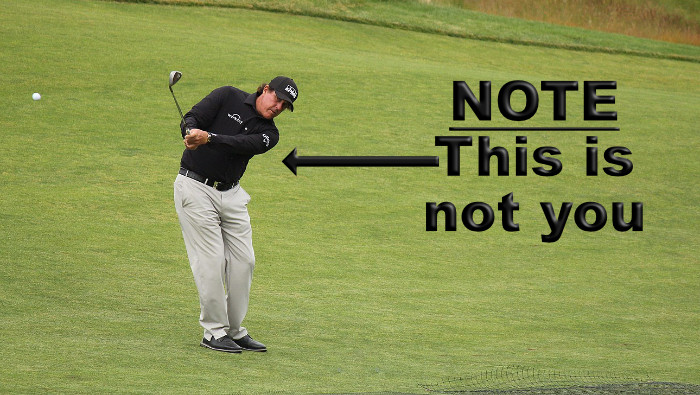 Go ahead, I won’t stop ya, but heed this.

Even if you were to go for the pin and hit your elusive perfect strike to 12 ft, the chance of you holing it is less than 40% (that’s the pro average).

By aiming 10-20 yards past the pin (on perfect strikes) and allowing your average shots to fall short  (and closer to the flag), you will get more of those 12 footers. 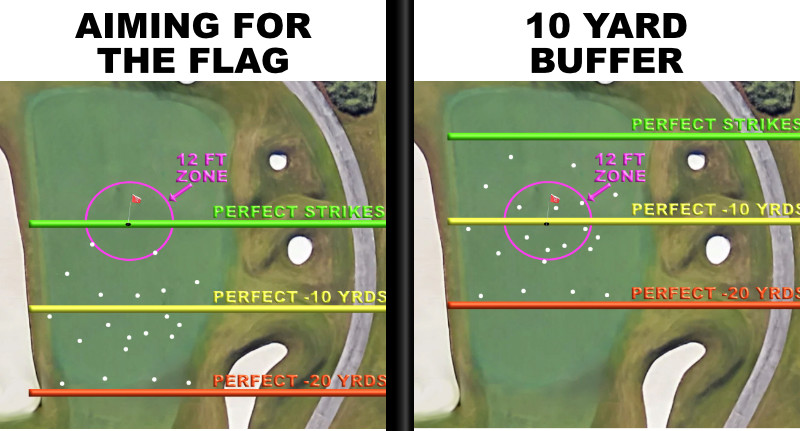 And you’ll also get fewer “short of the green” shots that cost you 0.4 – 0.9 shots each time (depending on the quality of your short game).

Or even more lost shots (if there are hazards).

We always need good strategy, regardless of how good our swing gets. In fact, it’s one of the defining differences between the good and world-class players.

Sure, anyone can win when they are firing on all cylinders. But staying in contention week-in/week-out and having a consistently great golfing career requires smarter thinking.

With that said, all golfers can benefit incredibly from

Adam specializes in coaching, which encompasses more than just technical elements. While Adam has a deep understanding of swing mechanics, he also understands that we are a product of our perceptions, training, physical attributes, concepts, emotions, equipment, environment and nutrition.

Adam currently teaches golfers the importance of developing skill as well as technique, and builds their games as a whole – including strategic and psychological strength. Adam’s theories are cutting edge, utilizing much of the newest research in the field of learning. He presents them in an easy to understand way that will make you revolutionize how you learn the game.

The Biggest Cause of an Offline Golf Shot

Is Your Ball Position Correct For Each Club?